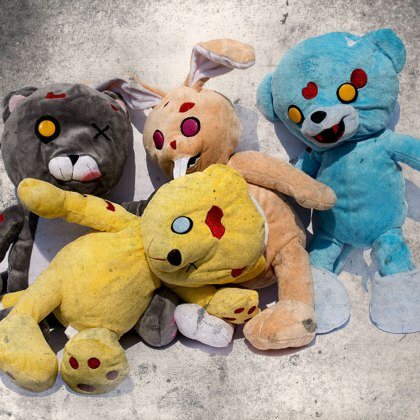 Choose from a number of Stuff A Zombie Animals!
Photo by: Bobby K Entertainment

Think of Build-a-Bear, but with a terrifying twist! Created by Bobby K Entertainment, Stuff A Zombie Animals are a cute, yet spooky gift idea for a friend, loved one, or even yourself!

Based out of Big Flats, New York, Stuff A Zombie Animals allow individuals to choose an animal of their liking and then stuff it and place a spider inside for bad luck. Then your animal of choice receives a bloody t-shirt to wear, followed by a death certificate for you to take home.

After a while, you could have an entire collection of undead plsuh zombie animals! If you know someone who is a die-hard zombie fan, the Stuff A Zombie animals are a great, unique gift idea that is sure to impress!

Click here to order your Stuff a Zombie animal today!

There are no comments for this article.

Get the conversation started below!